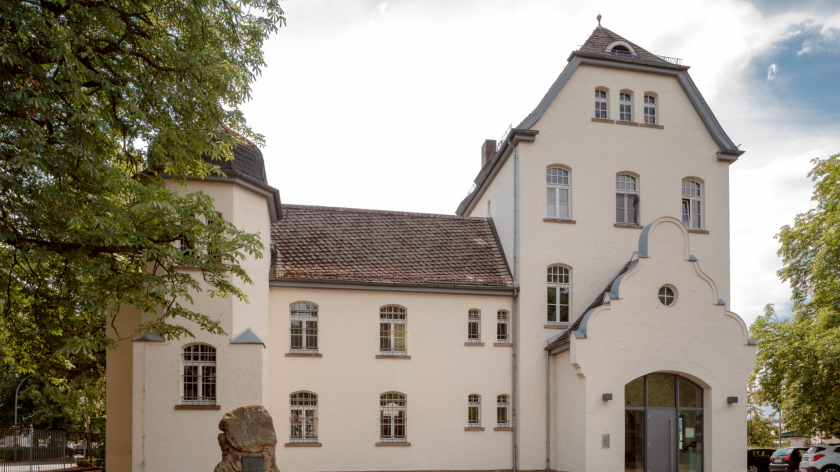 Historicum 20 provides a political and historical perspective of the use of Oberes Alleefeld in Bad Arolsen in the 20th century and how it affected the town.

The preamble of the Historicum 20 association states that the purpose of the institution shall be to realise a place of living memory though the establishment of a documentation centre in the staff building of the former barracks with a permanent exhibition about the four epochs – principality, Weimar Republic, Nazi years and Belgian garrison.

The goal is to provide the interested public as well as schools with a forum for actively confronting the time and the place, allowing them to form differentiated opinions about recent historical events and current political developments, and to stimulate ideas for documentation or research projects In addition, events are held such as public talks; group discussions, sometimes including eyewitnesses; performances etc.

The permanent exhibition in the staff building opened in January of 2012. The lobby and the large room on the ground floor are dedicated to the history of the Arolsen Archives as a centre for humanitarian aid.

As part of the overall concept, the next room on the ground floor is the 'school archive' for teaching and studying. In this history lab, students can work with selected documents and materials on specific topics or biographies. In addition, a youth forum has been established. It provides school children with the opportunity to publicly present their work results on recent historical topics, such as for example Nazi architecture in Arolsen.

The cell on the ground floor has the subject "Aus dem Familien-Album" - pictures from the family album. It presents examples of migrant families that talk about their own family histories.
The cells of the upper floor cover the following topics in chronological order: "Von der Residenzstadt zur umjubelten Garnison" (From Prince's residence to celebrated garrison, 1867 to 1918), "Keiner will sie haben" (Nobody wants them, 1919 to 1933), "Auf Hitler vereidigt" (Sworn to loyalty to Hitler, 1933 to 1945) and "Von der Besatzung zur Freundschaft" (From occupation to friendship, 1952 to 1994). These complex subjects are presented at various levels.

The alcoves in the corridors represent the structure of the information. Information bands show a timeline. It shows what happened at the Oberes Alleefeld compound, what happened in Arolsen, in Germany and elsewhere. The individual cells focus on specific contents, e.g. in the time period from 1919 to 1933 – a grammar school was housed in the barracks at the time and two of its pupils would later become significant – the physician and resistance fighter Georg Groscurth and the author Christine Brückner are presented. He finished school in Arolsen in 1923; she experienced how the SA took over the barracks compound.

Additional information media such as digital and audio stations and presentation facilities for films and film documents are used.